▸  What Is Free Association?

▸  What is Existential Psychoanalysis?

There are many rationales for participating in a Heidegger reading group, depending on the composition of the group and the objective of the participants. Heidegger is easily the most influential philosopher of the twentieth-century, and one of the most important philosophers of modern times. More secondary source publications are devoted to Heidegger than any other philosopher, and his impact and dissemination is, if anything, still growing. His collected works in German number more than one hundred volumes, and they are still being translated into English. No one who fancies him or herself to be well read can afford not to read him and form an opinion on his relevance. 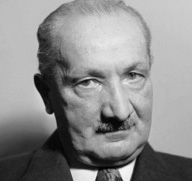 Heidegger is also one of the — if not the — most controversial philosophers of modern times. Most of this controversy derives from his brief association with the Nazi party, from 1933 to 1934. Some have consequently branded Heidegger a Nazi and refuse to read him. Others read, and even admire him despite his brief association with National Socialism, and still others see this episode as an act of folly that has been gravely misunderstood by his critics. But the other source of Heidegger's controversy is due to his philosophy itself. Heidegger is considered the most difficult philosopher in history to follow, yet the outlines of his philosophy are extremely approachable and even startling in his unforgiving critique of modern culture.

We view action only as causing an effect. The actuality of the effect is valued according to its utility. But the essence of action is accomplishment. To accomplish means to unfold something into the fullness of its essence, to lead it forth into this fullness – producere. Therefore only what already is can really be accomplished. But what "is" above all is being. Thinking accomplishes the relation of being to the essence of the human being. It does not make or cause the relation. Thinking brings this relation to being solely as something handed over to thought itself from being. Such offering consists in the fact that in thinking, being comes to language. Language is the house of being. In its home human beings dwell. Those who think and those who create with words are the guardians of this home. Their guardianship accomplishes the manifestation of being insofar as they bring this manifestation to language and preserve it in language through their saying. Thinking does not become action only because some effect issues from it or because it is applied. Thinking acts insofar as it thinks. Such action is presumably the simplest and at the same time the highest because it concerns the relation of being to humans. But all working or effecting lies in being and is directed toward beings. Thinking, in contrast, lets itself be claimed by being so that it can say the truth of being. Thinking accomplishes this letting.

From Letter on Humanism

If you could make some sense of the above quotation, then you will probably be able to follow reading Heidegger! Despite the challenging nature of his prose, Heidegger's reach has been monumental, impacting many disciplines beyond philosophy itself, including ecology, literary theory, psychoanalysis, hermeneutics, deconstructionism, postmodernism, post-structuralism, existentialism, phenomenology, anthropology, film studies, technology, and so on. No other modern philosopher has had such an impact on contemporary culture, and most people claim they cannot understand a word he says! Yet his ideas have become commonplace.

Under the auspices of Free Association, I have been convening a weekly Heidegger reading group for nearly five years in my San Francisco office, and we have barely scratched the surface. The purpose of this reading group is to connect the relevance of Heidegger’s critique of the human condition to the theory and practice of psychoanalysis. In order to reach this objective, we compare Heidegger's ideas to those of Freud, and to a lesser extent, other psychoanalytic thinkers, especially R. D. Laing, with whom I trained. We typically read about ten pages of text for each 90-minute session, taking care to decipher Heidegger’s intent while applying it to clinical practice, emphasizing Heidegger’s relevance to therapy while noting similarities with and divergences from psychodynamic theory and practice, with a special emphasis on practice.

Some of the texts we have already studied include Being and Time, Basic Writings, the Zollikon Seminars, Poetry, Language, Thought, The Question Concerning Technology, On the Way to Language, the Bremen and Freiburg Lectures, and more. We have recently begun reading Pathmarks, a collection of many previously unpublished papers. The most important book Heidegger wrote was Being and Time. It is essential to read this book in order to fully appreciate Heidegger’s philosophy, but it is probably better to start with his later, more approachable writings. The reading group is circular, and we come back to texts previously covered, including Being and Time. There is no ideal place where one should begin reading Heidegger. You just jump in and enjoy the ride! I can assure you, it is quite thrilling.

The reading group is especially suited for graduate students and therapists wishing to integrate existential thinking into their practice. The composition of the group is not fixed, with members joining and leaving with regularity, so you needn't fear that you will be behindÂÂÂÂÂ the others in the group if you wish to join. There is quite a broad range of participants, some novices, some quite sophisticated. While a familiarity with Heidegger is desirable, the group is designed to introduce members to Heidegger’s basic ideas and their relevance to their own clinical thinking. A familiarity with basic psychoanalytic principles may serve as a workable preparation for appreciating Heidegger’s central ideas, including his contribution to thinking about the nature of being, death, guilt, anxiety, authenticity, and the self.

If you are interested in joining the group, contact Dr. Michael Guy Thompson for an opportunity to meet and get acquainted, at which time any questions you may have can be addressed. 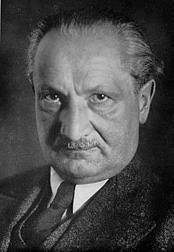 Michael Guy Thompson, Ph.D. (born 1947), lived in Havana, Cuba until age 14 when he and his family returned to Tennessee, where he attended the Baylor School for Boys in Chattanooga. He subsequently served in the U. S. Army Security Agency in Vietnam and later in Washington, D. C. In 1973 he moved to London to work with R. D. Laing where he trained as a psychoanalyst. In 1980 he returned to San Francisco where he founded Free Association, a psychoanalytic salon devoted to integrating phenomenology and psychoanalysis. He subsequently joined the Psychoanalytic Institute of Northern California in San Francisco where he is currently a Personal and Supervising Analyst and Faculty member. Dr. Thompson has been active in the psychoanalytic community since returning to California in 1980 and has presented his ideas at numerous professional conferences over the past three decades. He is a past President of the International Federation for Psychoanalytic Education (IFPE), and the Northern California Society for Psychoanalytic Psychology (NCSPP). Dr. Thompson also serves on the editorial boards of several professional journals, including Psychoanalytic Psychology, the Journal of Phenomenological Psychology, the Journal of European Psychoanalysis, and The Journal of the Society for Existential Analysis. He is the author of more than 100 journal articles, books, and book reviews on phenomenology, psychoanalysis and schizophrenia. He is a popular speaker and has lectured extensively throughout the United States, Canada, Mexico, Great Britain, Spain, and Australia over the past thirty years. Dr. Thompson is a member of varied psychoanalytic organizations, including the International Psychoanalytic Association and the Philadelphia Association, London. He practices psychoanalysis in San Francisco and lives in Berkeley, California.